PDMP's: A discussion For and Against a State By State Monitoring Program

Pharmacy Times reports that, "The first PDMP program was enacted by New York State in 1918 and was used to monitor prescriptions for cocaine, codeine, heroin, morphine, and opium. With this program, pharmacists were required to report copies of prescriptions to the health department within 24 hours."

The Benefit of a PMDP in Today's World

So fast forward 100 years and what is a PDMP today? According to the CDC: A prescription drug monitoring program (PDMP) is an electronic database that tracks controlled substance prescriptions in a state. PDMPs can provide health authorities timely information about prescribing and patient behaviors that contribute to the epidemic and facilitate a nimble and targeted response.

The Data For PDMP:

In 2016, research funded by the National Institute on Drug Abuse (NIDA) found that state implementation of prescription drug monitoring programs (PDMPs) was associated with a reduction in opioid-related overdose deaths. The study, published in Health Affairs, also found that PDMPs that monitored greater numbers of drugs with abuse potential and updated their data more frequently had greater declines in opioid-related overdose deaths than programs without those characteristics.

The AMA reports that, Physicians and other health care professionals have increased use of state PDMPs by 121 percent between 2016 and 2017. 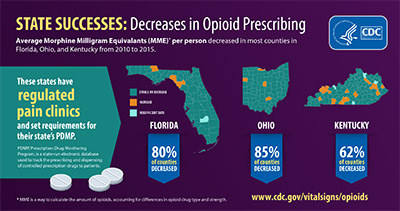 So with positive PDMP reports...NOW WHAT?

The success of a state’s PDMP depends on the particulars of the program, but states with strong participation requirements seems to have robust positive results.

Woody McMillin, of the Tennessee Department of Health, says the state’s Controlled Substance Monitoring Database Program (CSMD) became mandatory in 2013, and appears to be helping.

“We have seen positive changes, including a reduction in the morphine milligram equivalents dispensed, a reduction in the number of doctor and pharmacy shoppers going to multiple outlets to obtain drugs, an increase in queries to the CSMD by prescribers and extenders, and a change in practices, with some 41.4% less likely to prescribe certain controlled substances,” McMillin says.

Research from various organizations also points to promising results. In Florida, deaths related to oxycodone overdose dropped 25% after Florida implemented its PDMP in late 2011, according to a team of University of Florida Health researchers. New York experienced a 75% decrease in prescriptions issued through “doctor shopping” as a result of a 2012 requirement that prescribers check the PDMP before writing a prescription, according to the PDMP Center of Excellence at Brandeis University. Also according to the PDMP Center of Excellence, 74% of California physicians reportedly changed their prescribing practice as a result of patient activity reports created using the state’s PDMP.

What the States Say About PDMP's:

State laws may mandate that PDMP’s be checked with every controlled substance prescription written by a physician. Check out our State By State Guidelines for more information on that.

But, a state's medical society can fundamentally disagree with their legislature. For example, let's look at Texas.

The Texas Medical Association states on it’s website that it is committed to curbing the abuse and diversion of prescription drugs and supports using the state's new prescription drug monitoring program (PDMP), PMP Aware, as a vital part of a technology-based solution to the opioid crisis. However, TMA doesn't believe a mandate for physicians to check the PDMP every time they write a prescription for a controlled substance is a practical, effective piece of that solution — despite the popularity of similar mandates in other states and the Texas Sunset Advisory Commission's recommendation for one.

"I think that as long as we are using technology to advance the cause of trying to prevent doctor-shopping, and trying to prevent the overutilization by patients who get these prescription narcotics, and targeting geographic hot spots, I think we're working in the right direction," said anesthesiologist Ray Callas, MD, chair of TMA's Council on Legislation. "And we have the technology in hand to do just this without a mandate to check every prescription."

Missouri is among the 20 worst states for drug overdose deaths, but it was the only state left without a statewide prescription drug monitoring program.

Franklin County, MO Commissioner Dave Hinson has gone on record as stating that, There is no evidence that prescription drug monitoring programs (PDMPs) have reduced overdose deaths. Hinson continued onto say PDMPs burden pharmacists. “It puts pharmacists in a trick bag,” he said. “They have an order to dispense from the doctor, so they are supposed to dispense.”

Hinson added that many doctors don’t feel it is their responsibility to check if other doctors have prescribed painkillers to patients. “They don’t want to be under anyone’s thumb,” he said. Hinson argues that the monitoring programs are not “real time,” explaining that the dispensing of prescription drugs are not reviewed until two to four weeks later.

Counties in Missouri have formed their own PDMP's to accommodate for a lack of a state wide system. St. Louis County is the PDMP administrator and other counties in the state can subscribe to their system.

SO WHERE ARE WE NOW:

The AMA reports that the number of PDMP queries jumped from almost 61.5 million in 2014 to more than 136 million in 2016, even though many state PDMPs still lack timely information and have problematic interfaces which are sometimes hard to read or slow to access. Another weakness pointed out by the AMA is that few Veterans Health Administration pharmacies report data to the PDMP operated by the state they are located in.

Anecdotally, we at AffirmHealth have heard complaints about state specific formatting issues that may make printing specific patient PDMP records cumbersome or difficult to decipher. Delays in reporting was another concern cited by doctors and pharmacists in certain states.

Access and patient privacy remain a topic of discussion. Just who is accessing this data in the doctors office or potentially beyond? “Some of the concerns around PDMPs usually revolve around patient privacy issues,” said Dr. Dan Hunt, Lansing, Michigan-based corporate medical director at AF Group. “They want to be sure that the appropriate people have access to the information and that inappropriate people don’t. It would not be unrealistic to think that with all of the data hacks that go on in our world today ... there would be concerns about how that would be managed.”

Effective and compliant documentation continues to be at the forefront of practice managers, nurses and physicians minds. Regardless of the system, results of PDMP checks should be documented in the patients EHR, whether there are positive or negative findings.

There isn’t a perfect system..yet...but the impetus being that as technology improves utilization which is not mandated by some states should improve as well. Tools such as AffirmHealth’s Shield help bridge technology to the end user.

Subscribe to our blog, so you can stay up-to-date on this topic and more:

The information presented on or through this website is made available solely for general information purposes and is not intended to substitute for professional, medical or legal advice. We do not warrant the accuracy, completeness, or usefulness of this information. Any reliance you place on such information is strictly at your own risk. We disclaim all liability and responsibility arising from any reliance placed on such materials.

END_OF_DOCUMENT_TOKEN_TO_BE_REPLACED

What can states do to stop the opioid crisis: Increasing prescriber use of prescription drug monitoring programs is critical to stopping opioid misuse and overdose deaths

Our nation is in the midst of an unprecedented opioid epidemic. The growth of the opioid crisis has generated an outcry ...

END_OF_DOCUMENT_TOKEN_TO_BE_REPLACED

Some of the news stories that caught our eye at AffirmHealth for the first week of March:

END_OF_DOCUMENT_TOKEN_TO_BE_REPLACED

Weekend Round Up - May 2nd

Happy Spring Break! A few of the news stories that caught our eye at AffirmHealth this past week.

END_OF_DOCUMENT_TOKEN_TO_BE_REPLACED

Are you an athenahealth customer?