Everyday the media is flooded with stories about the toll of opioid addiction in America. New rules and regulations are regularly being introduced on a state and national level as we collectively grapple with how to tackle this epidemic. However, the war on opioids in America is not new. In 2011, the Centers for Disease Control warned that prescription painkiller overdoses had reached what was considered “epidemic levels.”

The Office of National Drug Control Policy also announced a plan in 2011 to fight prescription drug abuse. Their focus was specifically on opioids and involved four components: education, monitoring, disposal, and enforcement. States adopted their own policies in the following years and the media was flooded with stories of pill mills being shut down. Additional enforcement was put in place to stop doctor shopping by patients working to game the system for access to valuable opioids. Despite this broad spread efforts the number of opioid-related deaths continued to rise.

Science Daily reports, death rates from drug overdoses in the US have been on an exponential growth curve that began at least 15 years before the mid-1990s surge in opioid prescribing, suggesting that overdose death rates may continue along this same historical growth trajectory for years to come. These findings suggest that, to be successful, prevention efforts must extend beyond control of specific drugs to address deeper factors driving the epidemic.

The CDC paints a bleak picture:

“No area of the United States is exempt from this epidemic—we all know a friend, family member, or loved one devastated by opioids,” said CDC Principal Deputy Director Anne Schuchat, M.D. “All branches of the federal government are working together to reduce the availability of illicit drugs, prevent deaths from overdoses, treat people with substance-use disorders, and prevent people from starting using drugs in the first place.”

IMF is mixed into counterfeit opioid and benzodiazepine pills, heroin, and cocaine, likely contributing to increases in overdoses involving these other substances.

“The current epidemic of overdose deaths due to prescription opioids, heroin and fentanyl appears to be the most recent manifestation of a more fundamental, longer-term process,” senior author Donald S. Burke, M.D., of the University of Pittsburgh said in a news release. “Understanding the forces holding these multiple individual drug epidemics together in a tight upward exponential trajectory will be important in revealing the root causes of the epidemic, and this understanding could be crucial to prevention and intervention strategies.”

Taking a step back, the WSJ examined the historical data, opioids are not the only culprit pushing the surge in deaths from drug overdoses.  Death rates from overdoses have been on an exponential-growth curve for nearly 40 years, involving methamphetamines, cocaine and other drugs in shifting patterns around the country and involving different age groups, a based on analysis of federal data.

What Role Does PDMP Usage Play in this Fight?

According to a national survey by the American Medical Association (AMA), physicians—87 percent of them—are on record as supporting PDMPs. Those surveyed agreed that the programs help physicians become more informed about a patient’s prescription history.

In a pair of studies published in 2016, researchers from Geisinger Health System and Weill Cornell Medical College analyzed the role of predictive analytics, big data analytics, and state-by-state prescription monitoring.

The Weill Cornell study reviewed the prescription drug monitoring programs of 24 states from 2001 to 2010.

Data analyzed was pulled from the National Ambulatory Medical Care Survey (NAMCS). Additionally, more than 26,000 ambulatory office visits for pain management were evaluated.  The researchers found that implementation of an electronic drug monitoring system resulted in a greater than 30 percent reduction in prescription rates oxycodone, morphine, codeine, and methamphetamine, the most commonly prescribed Schedule II opioids. 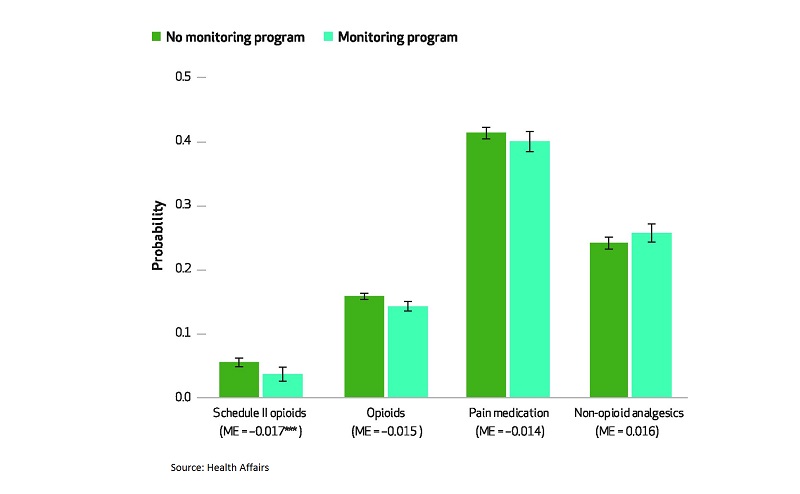 Justin Mallett, in his paper, The Effect of Prescription Drug Monitoring Programs on Opioid Prescriptions and Heroin Crime Rates, states that, "PDMPs act as a negative supply shock for legally-obtained prescription opioids by making it more difficult for abusers to obtain prescriptions."

In November of 2017, Clinical Pain Advisor wrote about the PDMP effectiveness of reducing opioid risks. The article states in part that registration in prescription drug monitoring programs (PDMPs) was shown to lead to statewide declines in high-risk opioid prescriptions, these declines were similar to those observed in non-PDMP registrants, according to a study published in the Journal of Pain.

The investigators suggest that some of the decline in statewide "opioid prescribing may have resulted from an 'observer effect', in which clinicians perceived that prescribing patterns were being more closely scrutinized."

In April 2017, the Federation of State Medical Boards (FSMB) Chair, Gregory B. Snyder, MD, DABR, appointed a Workgroup on Prescription Drug Monitoring Programs (PDMP) in accordance with FSMB Resolution 17-1: Mandatory Use of Prescription Drug Monitoring Programs, which was adopted by the FSMB’s House of Delegates and which directed the FSMB to establish a task force to study PDMP use in the United States and its territories. The Workgroup was charged with evaluating the impact of mandatory PDMP query on patient outcomes and the prescribing of controlled substances; evaluating challenges to increasing PDMP utilization, including, but not limited to: a) authority to access; b) currency of data; c) Electronic Medical Record (EMR) integration; and d) interoperability; and developing recommendations to state medical and osteopathic boards (hereafter referred to as “state medical boards”) regarding physician utilization of PDMPs, including a recommendation regarding mandatory query.

Initiatives like these continue to evolve. Physicians, patients, legislatures and advocacy groups continue to weigh in on the effectiveness of these programs while maintaining patient care. With additional legislation pending, the landscape and the regulations will continue to evolve. What the final result will be is still to be determined. But this topic is at the forefront of healthcare and the American and Global media coverage.

Send us your thoughts on initiatives that are working and what's not effective in the war against the Opioid Epidemic. Stay up to date on this ever evolving topic, subscribe to the AffirmHealth Blog:

The information presented on or through this website is made available solely for general information purposes and is not intended to substitute for professional, medical or legal advice. We do not warrant the accuracy, completeness, or usefulness of this information. Any reliance you place on such information is strictly at your own risk. We disclaim all liability and responsibility arising from any reliance placed on such materials.

END_OF_DOCUMENT_TOKEN_TO_BE_REPLACED

As a clinician in America today, there can be intense pressure to focus on multiple things at once. Our priority is ...

END_OF_DOCUMENT_TOKEN_TO_BE_REPLACED

As a both a practicing emergency medicine physician, and Chief Medical Officer at AffirmHealth, an organization ...

END_OF_DOCUMENT_TOKEN_TO_BE_REPLACED

Ohio led the nation in opioid overdose deaths in 2014, and deaths have continued to rise with increased use of heroin ...

END_OF_DOCUMENT_TOKEN_TO_BE_REPLACED

Are you an athenahealth customer?